Wisdom of the 2 Jeffs (Round holes and square pegs.) 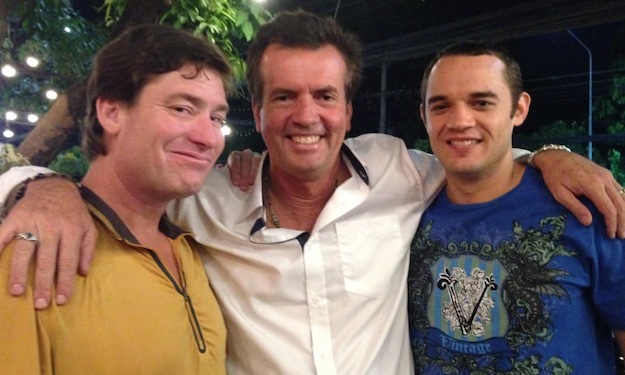 This past week, I had to make a border run. It sounds exciting, doesn’t it? Border Run. In order to get a new visa to be in Thailand for an additional 6 months, I had to leave Thailand, go to Vientiane, Laos, visit the Thailand visa office, apply for and purchase the visa, and then return to Thailand all legal like. This is a modern day border run. On my way into Vientiane, I shared a minivan with some other border runners. One guy who looked mid twenties was named Jeff. He was a live wire, full of that young life energy that I once had. Ideally, at this point in my life, the young life energy has begun to transform to the wise elder energy. The jury is out on that one.

The next day, I saw Jeff at the Thailand visa office, and he was sitting with an older guy. The older guy is also named Jeff. Meet the 2 Jeffs. I now have two new friends, young Jeff and old Jeff, both living in Chiang Mai, both Americans, and both making a border run. Jeff, Jeff and Jay. Young Jeff has been in Thailand for four years, and old Jeff for two years, and all three of us were staying at the Sinnakhone Hotel in Vientiane. We agreed to meet in the lobby for dinner at 7PM. Kindred spirits unite.

We walked 10 minutes to a traditional Laos restaurant. We ordered drinks, Laos beef, chicken, several rice dishes, and then more beer. I was very happy to fully express and share my experiences in Thailand with two guys who could absolutely relate to my love of the people, the culture, the experiences and the knowledge I have gained. I shared effusively about my experiences in Phuket and Chiang Mai, and they knew exactly what I was talking about. If you haven’t ever been here, you can’t really know what it is like. I don’t know what it is like to be in the military. I may have some ideas, but the men and women who serve, they know. As a result of my ebullient sharing, the 2 Jeffs also told their stories, and I was right there, nodding my head in complete agreement.

Out of the dinner and the ensuing nightclub visit, I came away with some powerful realizations that I would like to share with you. First, I came to see the value of taking immediate action toward the things I want in life. I observed young Jeff. He does things his own way. At the tender age of 30, he knows what he wants and he works with immediacy to have those things. I saw this behavior in action in the way he is building a business in Thailand, in the way he ordered food and drinks, and in the way he worked the nightclub scene, ending up with a beautiful Laos girl at the end of the night. That energy of “let’s do it now!” is attractive. I could see how many of the women in the nightclub were drawn to Jeff, to his smile and to his “this is it!” energy. Many are uncomfortable with taking action, preferring “let’s think about it” in the security of the dream stealing comfort zone. Rather than jumping off the ledge and figuring it out on the fly, many pause and lose it. It is like my Dad use to tell his three boys, he who hesitates is lost. Great reminder. Thank you young Jeff.

From old Jeff, I learned life is just too short to sweat the small stuff. As I watched Jeff speak and move, it was clear that it is all small stuff. Jeff had just returned from a jaunt to Cambodia and Vietnam, was now is Laos, and soon would be returning to his residence in Chiang Mai. Jeff has traveled quite a bit. The more I travel, the more I realize that life always has and always will work out. Even when it does not seem like things are going well, life always has my back. Travel plans change. A plane trip can become a bus trip. A missed flight turns into a hotel room for the night. It all works out. Thanks old Jeff for the reminder to chill out and remember life is all small stuff.

The last observation I would like to share is around the controversial topic of authority. We spoke in depth about the socialization process in America. We talked about how we were all raised to give over our authority to a church, to a government, to an employer, and to the institution of marriage (and monogamy). We all agreed we did not want to bash any of these institutions. They all serve a purpose for millions of people. However, as we have all spent some time outside of America, we have to come to realize those institutions are choices, and the beliefs presented as fact, are also choices, and for the three of us, many of those institutions and beliefs no longer serve us.

The most poignant experience shared that night, the thing that solidified our brotherhood, is we all agreed that when we wake up in Thailand, we wake up happier than we have ever been. There is a lightness of being that allows our spirits to soar. It really is as simple as that. And isn’t that what life is all about? Find what you love, and do it. Spend your time in a place and around people that bring you joy. Dare to be happy. If you feel like a round peg going into a square hole, then go to the place with nothing but round holes. Of course the trick is to realize you are a round peg, and there are places where round pegs fit. That place may very well be America for you. For me I feel it may be part time in America, and part time in Thailand, and part time in places yet to be discovered. For the two Jeffs and me, our hearts tell us that Thailand is a beautiful place on our lonely planet. Thanks guys for a great night!

Living Full Out (I’ll sleep when I can.)