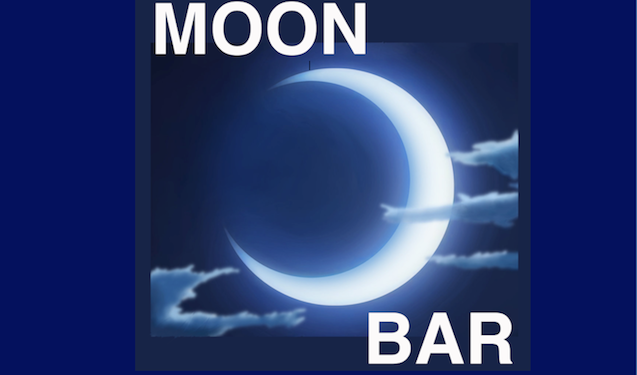 Mon is a beautiful woman, mid 40s, who currently works two jobs. Morning job is running a restaurant. Evening job is serving drinks and running a bar. I met Mon on my first bar visit in Chiang Mai several weeks ago. She brought me my Singha beer, and we played a game called Get Four. Hanging out with Mon continues to be a joy. She has a big spirit and infectious smile. She has a teenage boy, and also adopted a now two-year-old girl. Let’s return to the first night I met Mon at Wayne’s World Bar.

Four beers later, and 5 straight losses at the game, Mon told me she would be opening her own bar, and it would be called Moon Bar. She told me about the sign for the bar, and I told her my ideas. I drew it out on a piece of paper, and she loved it. I took a few minutes and made a design in Photoshop (which is the image for this blog) and texted it to her. Soon her sign will be up, and Mon will be operating her very own bar in mid December. Two jobs, two children, single mom, you have to respect her work ethic.

As impressive as all that is, this is what I want to share.  Mon is very popular with all the girls that work at Wayne’s bar. She appears to me to be a matriarchal figure. She is about 20 years older than most of them, and she has seen quite a bit of life. So last night I said, “Mon, are you taking any of the girls over to the new bar with you?” Without a thought, Mon said “No, not good for Wayne. No good for him, no good for me.”

I think it is fair to say that most people would not take that same position. Most people would be looking out for themselves first, and let Wayne figure it out on his own. Even though these women are friends of Mon’s first, she inherently knows that doing the right thing for Wayne is the best thing in the long run for both her and Wayne. Perhaps it is the Buddhist belief in Karma, which informs Mon’s life philosophy. I don’t know. I do know that when she answered my question, I knew she was right on so many levels. Her response was so simple, so spot on, so integrous and so pure. I have been in the position of starting my own businesses in the past. I did not always operate with “Mon quality” integrity. I suffered because of it.

“No good for him, no good for me.” Mon’s words and wisdom are well worth remembering.

Jay Cradeur is an author, blogger, internet marketer, world traveler, and coach. Jay has helped thousands to achieve their dreams of financial independence. As an internet marketing coach with a focus on personal development, Jay may be able to assist you in reaching your goals.  To get more information about Jay’s program, click on this link:  Work with Coach Jay.