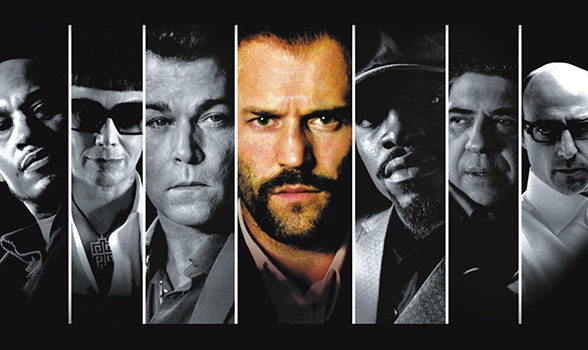 Author Jay Cradeur shares his most influential masculine movies that you probably have not seen.   Each of these hidden gems grossed less than $30 Million.

“I made him an offer he couldn’t refuse.”

“I love the smell of napalm in the morning.”

“There is no spoon.”

“The things you own end up owning you.”

I love movies. Throughout my life, movies have provided me escape, knowledge, excitement, drama, and exuberance. The quotes above come from my five of my favorite and most influential movies of all time. The Godfather, Apocalypse Now Redux, The Matrix, Braveheart, and Fight Club all have informed me as a man. But you have all seen those movies. I dug through my list of all time favorites and found nine that haven’t really seen the light of day. Personally, when someone recommends a movie to me and I have not seen it yet, I feel like a giddy boy on Christmas morning. This happened recently when a friend recommended Mr. Turner, which was a remarkable and powerful character study of a creative force of nature.  So now, for your reading and viewing pleasure, ranked in reverse order of box office gross, I present some potent opportunities for masculine pleasure and wisdom.

Anthony Hopkins stars in this film. Hopkins is one of my most bankable stars. If he is in a movie, I will most likely enjoy the film. Titanic masculine films such as Meet Joe Black, Silence of the Lambs, Legends of the Fall are all in his filmography. In The Edge, we observe a very smart man, a wealthy man, in battle against a bear and the foibles of his fellow man. He uses his intelligence to survive. I revere this movie for the line “What one man can do, another can do!” Alec Baldwin co stars.

Pierce Brosnan stars as a Julian, a middle aged hit man going through a mid life crisis.  As Julian skills degrade, he begins to lose his focus.  Greg Kinnear, a down on his luck businessman, plays the straight man. They forge an unlikely friendship that develops throughout the film. This movie is funny, and insightful, and is a study in trust, brotherhood and compassion. You will never forget the scene of Pierce Brosnan walking through a five star hotel lobby in only his underwear and cowboy boots. For those of us who have rounded 50, and are heading into the final half of our lives, you will appreciate the humor and irony of this film. The Matador reminded me that it is ok to say “Fuck It!”once in a while and do what I want regardless of what other people may think. Actually, as a writer, I am reminded of this quite a bit.

I was surprised to see that this film only grossed $10M. This movie is a siren song for the white collar working man. With Ron Livingston as Peter, the quintessential bored, under utilized office drone who has a transcendental moment and figures out a new way to survive and thrive in his Initech corporate world. Instead of going back to work after his experience, he stays home for a week, sitting on his couch and watching Kung Fu. Staring Jennifer Anniston as a flair wearing waitress and Peter’s love interest, this comedy is funny and biting at the same time. Gary Cole plays Peter’s boss, Lumbergh, to our joyous delight. Riiiiiight!

Andy Garcia plays the every man who finds himself bored with life, and willing to give a few new people and opportunities a chance to generate some excitement before it is too late. He is proud to live with his wife and daughter in a little strip of land near New York City called City Island.   With Juliana Margulies as his wife, we see painfully well the malaise that can envelop a marriage, and the potential for destruction that lies at the heart of ennui. This movie has some great scenes that you will not soon forget. Garcia’s movie audition scene will give you chills.

Ben Kingsley nails his resistant middle aged character to perfection. He plays a very successful author, lecturer and professor who falls in love with one of his much younger students, played decadently by Penelope Cruz. Here we see self-sabotage at its most painful. If you can imagine Penelope Cruz loving you absolutely, and you love her, and still, and you push her away, then you may begin to feel the self-loathing we see in Kingsley’s character. It seems idiotic and non sensical for such a brilliant man to behave so irrationally, but such is the power of our own mind, and wounds of the past. This guy can’t get out of his own way, even with Ms. Cruz waiting for him to show up. The end of this film is heartbreaking. Elegy also features Dennis Hopper who plays Kingsley’s best friend. They share some brutally honest conversations, the kind men live for. Through this relationship, I feel many men will ask themselves if they have the same kind of friendship and intimacy and honesty with another man in their life. It is a question worth asking and a relationship worth seeking out.

Epic. Locke, played by Tom Hardy, spends the entire film in his BMW driving from work to a hospital some two hours away. As we watch Locke and listen to his conversations with his workers, his children, his wife and his superiors, we begin to realize this guy has to make a decision not a one of us would want to make. Locke is a fascinating character study of a man and his evolving definition of integrity, and his willingness to destroy his family and work life to finally, for once in his life, do the right thing. This movie will have you asking the question, what would I have done?

Oh my. Warning, this movie has some graphic scenes. It is a tough watch for men. This is one of the first Ellen Page movies before she hit it big with Juno. Here she plays an sexually abused young woman, who has captured and confronts her abuser.   Not only does she confront him, but she feels what is good for the goose is good for the gander. She is not one to turn the other cheek. In this movie, we see feminine rage, and the impact abuse, both masculine and feminine, can have on human beings. Powerful stuff if you have the stomach for it.

Our final two movies grossed less than $500,000 combined. Both deliver powerful bravado performances. Brit Marling stars as Maggie, the charismatic leader of a small cult. Members are heavily vetted, must bath before every interaction with the female leader, and are asked to believe that which seems unbelievable. She confronts her members with her truth and asks them to believe or leave.  Maggie tells her followers: “When you are quiet and really still, you will be able to hear the sound of my voice.”  The male character, Peter, played by Christopher Denham, is a documentary filmmaker, intent on exposing the cult leader as a fraud. As the film continues, and we see and hear more from Maggie, Peter must decide for himself what is reality and what is not. It is a wonderful study of a man living with a question, a man lying to himself, who is in constant dialogue with his woman partner, unsure whether he should walk away or take action. If you are looking for answers, you won’t find them in this movie.

Remarkably, Revolver, which grossed the least, is the most influential of the movies on the list. This movie lives on my top five of all time list, knocking Fight Club to number six.   And as you can see, absolutely no one has watched this masterpiece. I have read reviews of the movie, and no one seems to get the significance of the film. Maybe you will and maybe you won’t. Jake Green, played by Jason Statham, has just been released from prison and has some old debts to settle. He meets a few unusual characters along the way, and while we are following the story, theories of chess and gamesmanship are presented to the viewer. It is mental candy for the masculine. Ray Liotta plays the main nemesis in the film. As the movie concludes, Jake Green finds himself in a an elevator, by himself, claustrophobic, confronting his ego, battling his ego, and ultimately transcending his ego. I recall watching this the first time and thinking, “Is this going where I think it is going?” This movie is one of the few I have seen that shows a man going through the painful death of ego and birth of awakening. It is powerful if you can see what is there. My hats off to Guy Ritchie for the courage to make a decidedly non-mainstream film that delivers such a powerful message.

There you go. Let the downloading begin. If you watch a movie on this list and liked the movie or have something to say about the movie, be sure to come back here and make a comment. If you have seen any of these movies and have a different take than me, please share. I would love to hear what you have to say. Movies, especially in this time of overwhelming information deluge, give us an opportunity to escape into a new world, a world in which we can be passive, receptive, engaged, surrendered, educated and entertained. Most movies are not up to the task. These nine movies which have been hand selected for you will, I believe, hold your hand, lead you across the river, and deliver you safely to the other side.

What Walter White and Breaking Bad Taught Me About Being a Man.